Chapter 3 and we leave Blighty again…

So Chapter Three of our travels begin as we set forth once more from Dover to Dunkirk. (OK, so we haven’t finished writing chapter two but it is in production!)

We have decided to turn left at Dunkirk with a view of going Est of Switzerland and approaching Italy from the Slovenia direction.

Belgium remains as boring as ever. Our only stay was for one night in Donkmeer, slightly to the East of Ghent. The approach to the site was via a one-way lane. Sadly, as a local explained to us, they use it both ways and one SUV had to back off about a mile… Leonnie met us with a look of horror at the size of our rig and explained that she would have to charge us for two pitches… A little discussion and a compromise was reached but in the process Leonnie seemed to adopt us. She rents the site but would really like to take residence in a houseboat but will never make enough money to do so.

The only sight of interest in Belgium was this Dutch lorry: 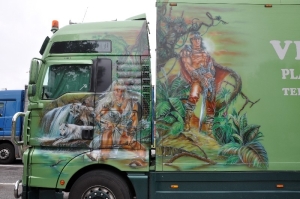 The most exiting thing on journey through Belgium!

From here we travelled on to Maastricht – not because we had heard of great things there but because there is a Camping Cheque campsite nearby.
This bit of Holland has no business being Dutch being a sort of earlobe between Belgium and Germany.

Gulpen (The home of Limberg beer)
We were a bit alarmed to find one of the eyes that we use to tether the Smart car to the trailer had broken loose and only the plastic body panel was holding it on! However, the chassis at the back is a curved pipe like a U with the ends to the back. This allows us to thread a strap through it and provide a more reliable fixing – we think.

Today, we took a trip into Maastricht town to do a bit of shopping and found them celebrating the 65th anniversary of the liberation of the Low Countries. This involved a number of Brits and Americans with Jeeps, lorries and the odd tank occupying the town square.

There was a scattering of 85 year old veterans but the ones in WW2 uniforms were volunteer re-enactment people. They pay their own expenses including the cost of bringing the vehicles over from the states etc. In fact 60% of the kit had been supplied by British conservationists. One Texan “soldier” had been over 4 times this year including the celebrations for the Normandy Landings. On that trip they had spent ten days over here, stopping to honour the fallen at each town, sometimes doing 4 ceremonies a day. “Not a cheap hobby” he explained.
There was even a fly past by a lone Dakota (I think, though it might have been a Lancaster).

On to Munich and (just) beyond
We decided to a long haul from Maastrict to Chiemsee, a lovely lakeside setting just on the German side of the border with Austria. One night in a truck stop and we were there 480 miles later!
The campsite was fine but one of the staff was a miserable old ***. Everything about us caused sharp intake of breath and “that will be extra”. The trailor, the car, the size of the van and finally, the boat!
But there were compensations… 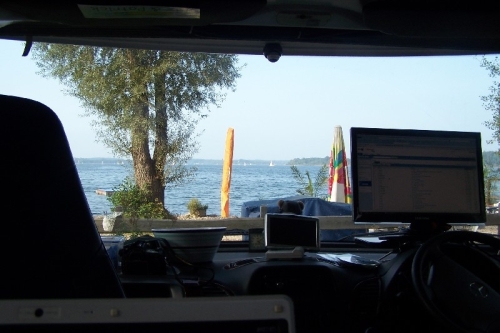 From the van window at Chiemsee

There are two islands in the See, one female with a convent (Fraunenisel)

Berchestgarten
We felt it would be a pity to be so close to Berchestgarten and not have a look… Particularily since the Germans are gradually demoliting everything that had a connection to Hitler there. We didn’t see any sign of the 3rd Reich at all but we did enjoy what we found.
Yet again, Patrick was dragged into a cable car and up a mountain. This was the very rewarding view from the top of Mount Jenner. Please note the lack of camera shake – Patrick took it!

(This is supposed to be a panoramic but doesn’t preview that way. But if downloaded it is!!!)

The village is very Alpine and what you would expect for a tourist spot. What we didn’t expect was to find the locals wearing traditional dress, not for the benefit of the tourists but because it suits their way of life.

The Austrian Lake District
We had been advised by a German neighbour at Chiemsee that Wolfgangsee was even better. So that was our next port of call. We found our campsite beside the lake as usual, this one run by Irmingard and her adult children.

This a view from our van…

A view from the van at Wolfgangsee

We used this spot as a base for a number of days out.

It has become a standing joke with us that every town we visit is forewarned and puts on some sort of entertainment for us. Salzburg was exceptional even by our standards. They were having a week long festival to celebrate a guy called Rupert. Did look him up in Wikipedia but have forgotten when or who he was. But being a town fixated on music, courtesy of Mozart, this festival seemed to be folk music.

And we thought the Scots were weird!

Folk singers - they were pretty good too.

There were more brass bands than in Brighouse...

What is that instrument?

Yet another squeeze box!

They know how to do elegance in Salzburg - a florist's shop! 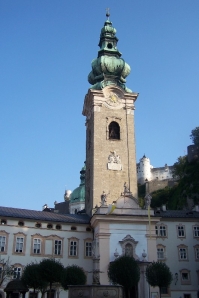 This is Rupert's Church - we think.

Patrick went on his own to see one of the salt mines that are renowned in Austria. Having spent all day away he was finally able to come back and say “Sorry I’m late. I’ve had a hard day down the salt mine!”

This was the mine where they found the miner from 300 years BC still preserved, or should that be pickled. They also discovered about 5,00 other graves from the Roman period. Yuch!

My German couldn't cope with working out what these were for...

This was the way in (looking back) 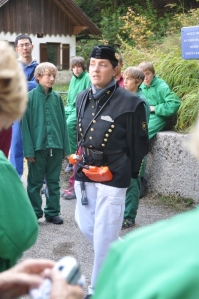 And our guide (or guard?)

She said it was the salt miner’s dress uniform but I wasn’t that convinced!

These wooden slides are set at about 60 degrees and are about 30 meters long. 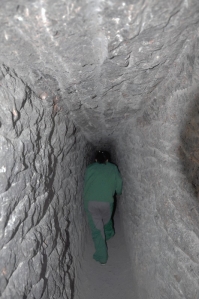 and the reason Liz wouldn't come with me...

This is a small village on yet another lake – Attersee.

and it ain't just the old ones in fancy dress...

We thought they were wedding guests but it turned out they were just passengers waiting for the paddle steamer/ferry!

As you can see, there was a wedding going on. The immediate reception took place on the quayside where champagne and music were enjoyed

where they were having a wedding…

and then the main reception was held on board a boat 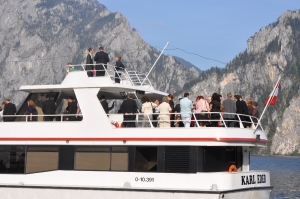 and the reception was on the See, of course!

What a setting. Almost beats going to the Bahamas!

This was the occassion of Liz’s famous 10Km bike ride! We crossed the lake from our campsite to the town of St. Wolfgangsee. Very picturesque

and found another wedding taking place

Isn't this what a Nun is supposed to look like?

and, of course, there had to be a reason for going. This is the little mountain steam train that climbs 1800 meters up the mountainside!

Our trip South to close to the Slovenia border was not without incident. It seems we didn’t “install” our Go Box electronic toll paying machine. That resulted in us having to pay a 220 Euro penalty!

At Ossiachsee, we are at the foot of the Julian Alps – you know the ones that are tall and all over the place and you never know what they will do next (weather, that is).

This is the range we have to get across to reach Lublijana next week.

At the base of the Julian Alps

And tomorrow we go to Slovenia. The debate is about wether to go over or under the mountains…

Footnote: We have some small video clips but they are enormous AVI files (nearly 1Gb). All my attempts at getting them down to uploadable sizes without knackering the quality have failed. Any suggestions would be very welcome.

One response to “Chapter 3 and we leave Blighty again…”